One of the most researched areas in biomaterial applications is protein contamination resistance. Uncontrolled non-specific adsorption of proteins on substrate surfaces causes several frequent issues in laboratory and clinical operations, such as coagulation and platelet adhesion. Modified surfaces with non-specific protein adsorption or enhanced specific protein selectivity are being researched and developed more frequently. Alfa Chemistry has done a lot of study on how to regulate the biocompatibility of biomaterials by reducing or blocking protein adsorption.

Fouling of polymeric materials normally reduces as their hydrophilicity increases, according to a rising number of studies. It's a novel strategy to use hydrophilic PVP-modified polymeric elastomeric biomaterial surfaces like PDMS. On PVP-modified PDMS surfaces, both protein adsorption and cell adhesion are considerably reduced as compared to unmodified control surfaces. Preparing biofouling-resistant biomaterials with SI-ATRP graft-modified PVP is a successful procedure. SI-ATRP graft-modified PVP is an effective method to prepare biofouling-resistant biomaterials.

The PEG-based method is the most common antifouling polymer addition applied to the substrate surface to achieve resistance to protein adsorption. Immobilizing PEG or grafting hydrophilic polymers like HPG, POx, and others improves surface hydrophilicity. Polysaccharides are also generating more research and attention due to their hydrophilic, biocompatible, and anticoagulant properties. Because polysaccharides include a large number of hydroxyl groups, surface glycosylation of polysaccharides, which has been widely explored for the development of self-anticoagulating membranes, has been demonstrated to increase their hydrophilicity. The antifouling properties of the membranes did improve after our researchers grafted glycopolymer brushes on the membrane surface. 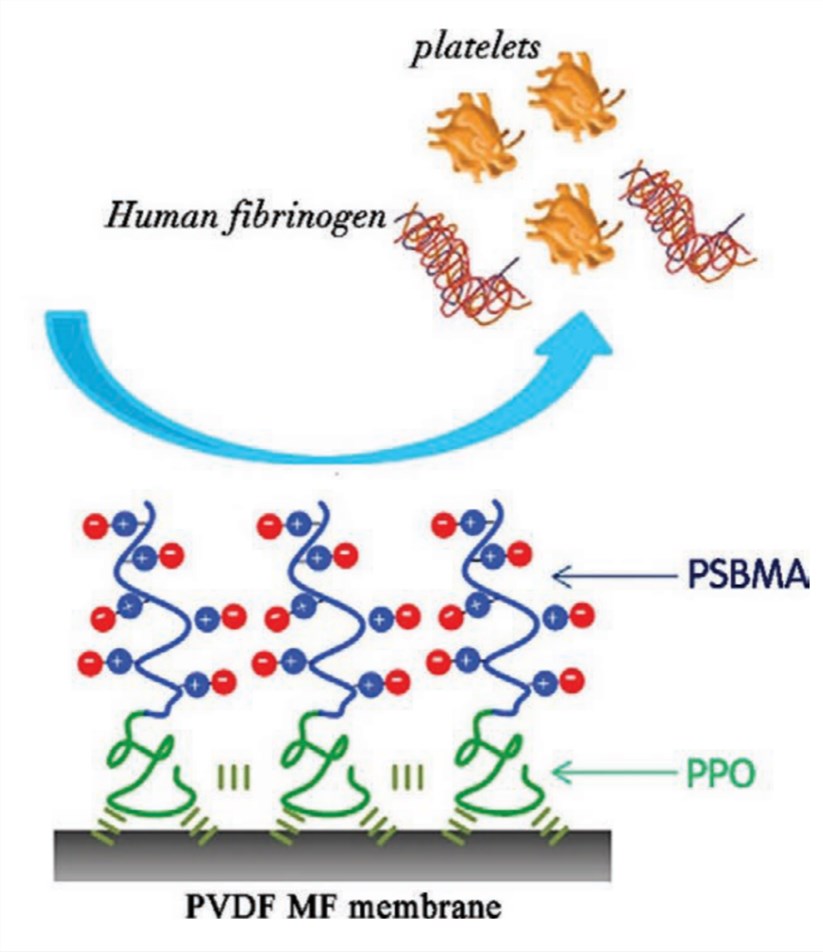 PEG systems also face various problems, such as blood compatibility. Combining amphoteric materials with chemical surface modification to improve antifouling qualities is also a viable approach, in addition to the methods mentioned above. For example, to increase the blood compatibility of polyvinylidene fluoride (PVDF) membranes, an amphoteric ionization technique employing a poly(propylene oxide) - block - poly(sulfobetaine methacrylate) (PPO-b-PSBMA) copolymer was developed. The surface hydrophilicity and resistance of PVDF membranes to irreversible biological contamination caused by protein and platelet adherence were improved as a result of this surface modification.

More information on surface modification techniques can be found in the following.