Water-soluble or swelling polymers are known as hydrophilic polymers. This concept encompasses a wide range of substances with significant technical and commercial significance, including numerous polymers of natural origin.

Hydrophilic polymers are soluble in water because they have polar or charged functional groups. Water or other polar substances can interact with them or solubilize them. Drug delivery, gene transport, protein distribution, self-assembly, surface modification, and catalysis are just a few of the many applications for these water-soluble polymers.

Alfa Chemistry provides a diverse range of hydrophilic polymers organized by the chemical nature of their structures to its customers. Acrylic polymers and copolymers include acrylic acid, acrylamide, and maleic anhydride polymers and copolymers, for example. Alylamines, ethylenimines, oxazolines, and other polymers with amine groups in their main or side chains are examples of amine-functional polymers. 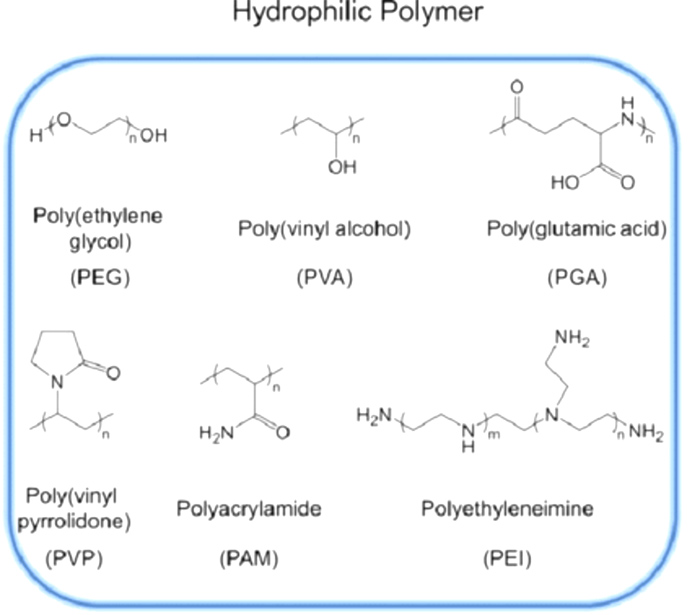 Hydrophilic polymers have found important applications in the biomedical field. For example, natural, biosynthetic and chemically synthesized polymer-derived nanoparticles are described, which are used as delivery carriers and vaccine adjuvants. In this way, properties such as sustained release, targeted delivery, alternative delivery and route of administration are introduced. One class of hydrophilic polymers that has recently attracted attention is poly(peptoids). In particular, Barz and coworkers utilized poly(sarcosine) as a shielding agent for siRNA multimers.