Due to the numerous applications of such surfaces in energy, water, healthcare, fundamental research, and everyday activities, the fabrication of hydrophilic and superhydrophilic surfaces has gotten a lot of interest in recent years. Oil-water separation, fog collecting, lab-on-a-chip, self-cleaning, blood-plasma separation, and cell biology are some of the applications for such intensely wetted surfaces.

Alfa Chemistry improves surface hydrophilicity by depositing molecular films/microscopic films of novel materials that are more hydrophilic than the substrate, or by modifying the substrate surface chemistry. Inorganic substrates are more commonly modified through molecular modification or coating deposition, whereas polymeric materials are more commonly modified by surface chemistry. Please contact us for more technical information.

Many organic molecules adsorb from the solution or gas phase onto chosen solids and self-assemble into self-assembled monomolecular layers, modifying the substrate's wetting characteristics. The Langmuir-Blodgett film process may deposit monolayers and multilayers mechanically. The deposited organic layer renders the surface hydrophilic if the terminal groups are polar. The groups with the highest hydrophilicity contain -OH, -COOH, and POOH.

Furthermore, much study has been devoted to coating materials with macromolecules and biomolecules, which are particularly popular in the modification of polymers in interface with biological fluids. Albumin and heparin are two biomacromolecules that are commonly employed. Poly(ethylene glycol) and phospholipid-like macromolecules have been intensively studied among synthetic polymers.

UV light causes polymers to oxidize and deteriorate. UV exposure produces chain scission, cross-linking, and an increase in the density of oxygen-based polar groups on the substrate's surface, making the surface more hydrophilic.

Alkali treatment of polymers, particularly at high temperatures, can improve their surface hydrophilicity. When polymers like polyolefin and polyethylene terephthalate are etched with concentrated alkali, hydrophilic groups like hydroxyl and carboxyl are generated on the surface.

Any natural or synthetic material can theoretically be chemically and mechanically roughened into a superhydrophilic surface or sub-microscopic particles that are then deposited to form a superhydrophilic coating, but only a few materials have been employed in this fashion. Titanium oxide (TiO2) and zinc oxide (ZnO) are two inorganic compounds that are extensively studied for their photogenic self-cleaning properties. Solution/suspension, inkjet printing, sol-gel processes, spin coating, and sputtering are the most common methods for depositing nanoparticle films on substrates. 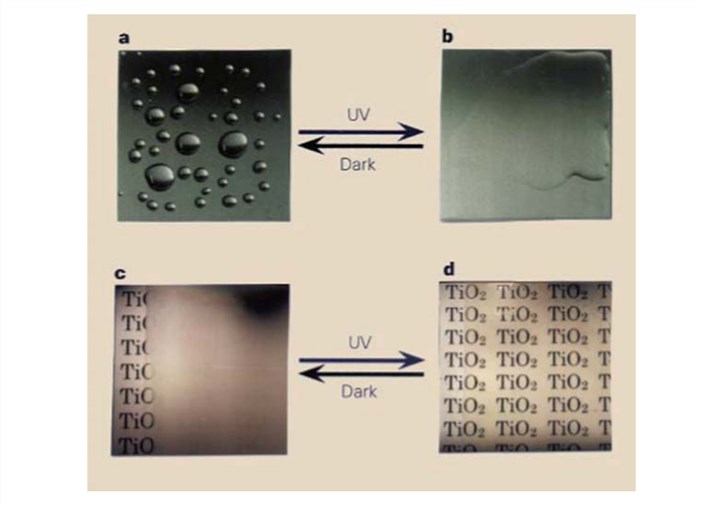 Polymers are also appealing materials for superhydrophilic coatings, but they typically require oxidation on their surfaces. As previously stated, several treatments that affect surface chemistry, such as surface irradiation with ion irradiation, electron beam, plasma, and corona treatment, can improve polymer surface hydrophilicity. To create the polymer superhydrophilic, the treatment must also affect the surface roughness, or the chemical treatment must be done simultaneously with surface roughening.