Alfa Chemistry also uses a "grafting through" approach, which is usually based on surface-attached monomeric groups, in other words, the surface has a self-assembled monolayer containing polymerizable groups. It is generally believed that in this process, polymer chains first grow in solution, and then surface-bound monomer units are inserted into the growing chains. In this way, free or surface-attached units will be introduced into the growing chain.

Introduction to The Method

One of the simplest methods for synthesizing graft polymers with well-defined side chains is "grafting through," commonly known as the macromonomer approach. Copolymerization of lower molecular weight monomers with free radical and acrylate functionalized macromonomers is common. The number of grafted chains is determined by the molar ratio of monomer to macromonomer and their copolymerization behavior. The concentrations of monomers and macromonomers change as the reaction progresses, resulting in random branch placement and the formation of graft copolymers with different branch numbers.

This method allows for the addition of branches either heterogeneously or homogeneously based on the reactivity ratio of terminal functional groups on the macromolecule to monomers. The difference in graft distribution has a significant effect on the physical properties of the graft copolymers.

To employ the "grafting through" method, we can use any known aggregation methodology. The molecular weight, molecular weight distribution, and chain end functionalization can all be controlled using living polymerization. The grafting process is basically self-limiting, and the amount of grafted polymer is mainly independent on the circumstances, meaning that the process is very robust to process changes Awesome. This layer's development mechanism suggests that "grafting through" could be one of the most successful surface altering techniques. 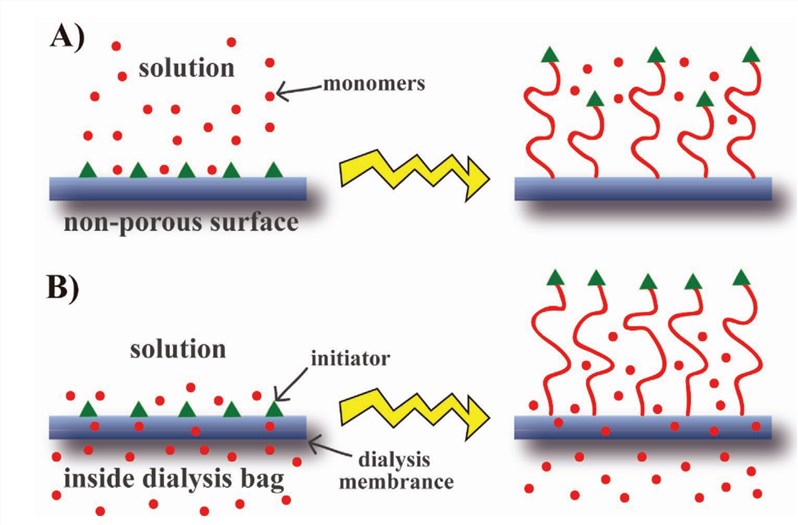 The problem of longer chains growing quicker than shorter chains is solved in the study by giving shorter chains with higher monomer concentrations throughout the grafting process. This method maintains a higher chain density on the changed surface while providing a more uniform chain length distribution. This decrease in polydispersity reduces friction and adhesion on substrate surfaces with variable characteristics and morphologies, allowing for surface modification via the creation of functionalized brushes for biomedical applications.