Surfaces with finely stratified micro/nanostructures exhibit supersurface-like properties that are solely determined by their geometry. Alfa Chemistry specializes in fabricating mimicked natural surfaces using manufacturing processes based on structural properties of biological nanostructures. The following are some of the precise ways we've utilized to build microarray surface surfaces that have been successful in producing surface structures of astonishing complexity.

Our most popular micro/nanofabrication approach for producing microarray-like surfaces with predetermined geometries is photolithography. Photolithography makes it possible to create reentrant structures, which are required for totally sparse surfaces. Here are a few examples of how to put this into practice.

Nanoimprint lithography is a straightforward method for applying stencil tiny designs to a substrate by deforming an imprint resist at the right pressure and temperature. The approach is low-cost, has a high resolution, and is easy to repeat.

Etching is a strong micro/nanofabrication process that permits intricate 3D microstructures to be created. Depending on whether the etchant is a liquid or a reactive gas, this approach encompasses both wet and dry etching. Dry etching often eliminates material in an anisotropic way, allowing structures with high aspect ratios, fidelity, and resolution to be created. Despite the fact that chemical contamination is a severe disadvantage, etching techniques are routinely utilized to produce sophisticated 3D micro/nanostructures. 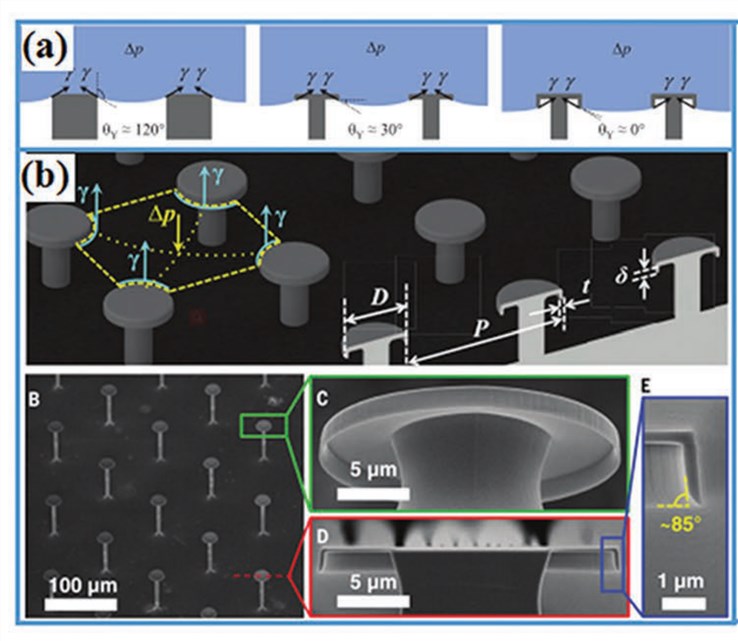 An important breakthrough in the fabrication of fully sparse surfaces is the ability to repel fluorinated oils with surface energies below 20 mN m-1. Superhydrophobicity for all available liquids, including perfluorocaprolactane, is obtained by anisotropically etching wettable silica substrates, and delicate double-folded liner-T-shaped microarrays are the key to producing superhydrophobicity. Dry etching makes it possible to make microarrays that would otherwise be impossible to make, such as asymmetric arrays of deflected nanopillars.

Femtosecond lasers have been used to pattern the surface of a wide variety of materials, including silicone, glass, polymers, metals, and even ceramics. The laser beam is focused on the processed surface through an objective lens; the beam ablates from the surface and removes the material at the focal point. The surface is then moved along a pre-designed path, such as row-by-row, to create the pattern by controlling the 3D translation phase.

Direct laser writing, also known as two-photon laser writing, is a technique for creating nanoscale features in photocrosslinkable resins without any masks. By using a laser of the appropriate wavelength, the transparent resin is polymerized at the focus of the laser. The movement of the laser inside the photocrosslinkable resin results in highly accurate multi-scale structures.